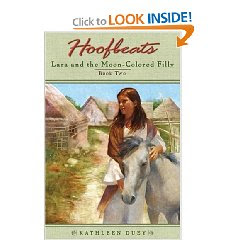 Another book NOT to read unless you have read Book 1 of the series. Although this one is written well and has great descriptions of the filly's reactions to her new life, I found it very hard to understand the setting. Hopefully, Book 1 explains.

A young girl, Lara, and her aunt are captured. Lara has with her a newborn filly who thinks she is her "mom" since her dam died shortly after giving birth. A milk cow allows the filly to nurse. Lara becomes very attached emotionally to the filly and even though she could escape if she wanted to, she won't because she can't leave the filly. If she leads the filly and cow with her, her captors would catch her very easily.

At first, I thought it took place during the pioneer days like the last HOOFBEATS I read, and the girls were captured by Indians. Actually, I thought this until more than halfway through the book! Then, I thought this must take place in Ireland or somewhere in Europe back in the Middle Ages? Hard to tell; unknown words are used that a child would be even more lost than I while reading. (OK, Amazon.com review of first book confirms Medieval Ireland.)

Odd ending too; but maybe one must read all four about Lara before enjoying the story. It's a shame that an intro isn't written to explain what happened previously.

HOOFBEATS: Lara and the Moon-Colored Filly and the other Lara books are written by Kathleen Duey.
Posted by Sharon Miner at 8:32 AM 1 comment: