Where the Horses Run by Judith Douglas 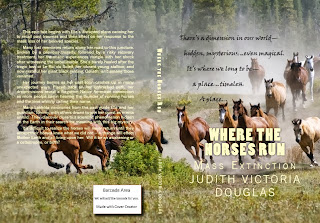 If you love to read horse books....and stories about the end of life as we know it...and mysteries...and Native American lore...and romance, then Where the Horses Run by Judith Douglas is for you!

This novel deals with the mass extinction of horses, except for the black horse belonging to Elle. She's a young woman who has kept journals from the year 2032 when during a horse show, all the horses - other than Goliath, the one she was riding - disappeared. She also has "spells" ever since an earlier bad accident that caused her horse to die tragically. So she has a a dog named Dexter that can sense when her spells are starting and run get help for her.

During these spells, she learns from Native Americans in another world, or dream state. She also sees all the horses that left her world.

Does the vanishing of horses give a hint at what may become in the near future?

The author gives lots of different insights, beliefs and possibilities to the end of the world. Although sometimes wordy and repetitive, the story gives the reader something to think about - what would our world be like without the magnificent horse?