Racing Into Trouble by Maggie Dana 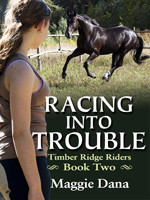 Maggie Dana has another hit with the second book in the Timber Ridge Riders series - Racing Into Trouble.

Kate and Holly have their ups and downs in their friendship in this story. Kate is even fired from her job at the stable because of a mean-spirited rider named Angela who always gets Kate in trouble without evidence of her crimes.

The characters are well rounded, the horse scenes are realistic and exciting and the plot has the reader  cheering on Kate and Holly. This book, like the others, is sure to please young horse lovers.

The ending is upbeat and hints at the setting of the third book in the series.

Read more about the author and her books at http://timberridgeriders.com/

Klinger - A Story of Honor and Hope 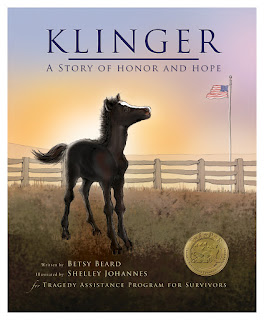 Klinger is written by Betsy Beard and illustrated by Shelley Johannes and won a Moonbeam Children's Book Award. Beard is the editor of the Tragedy Assistance Program for Survivors (TAPS), a non-profit support group for all whose lives have been forever changed by their loved ones who died while in the U.S. Military.

Klinger is a real Percheron Morgan who was donated to the Caisson Platoon in 2003. Children who visited the Fort Myer stable in Arlington, Virginia where he lived fell in love with the big, gentle horse. The idea for Klinger's book was instigated by TAPS founder, Bonnie Carroll.

The Story:
As a foal, Klinger was told he was special, even when his skills as a runner were far below the other racehorses on the farm. At three years old, he was sent to Virginia to learn a new career - in the U.S.Army.

After training, Klinger joins the team to "pull the wagons that take the fallen heroes to their final resting place."

On Memorial Day, TAPS holds Good Grief Camp and children of the soldiers visit the stable and hug him. Klinger realizes that he is more special than any racehorse.

This hard cover children's book is beautifully written and illustrated!