If you are looking for a hardcover picture book about a horse with an inspirational message, have I found the perfect book for you! I picked up an autographed copy at Hot To Trot Tack Shop in Cocoa, Florida for my granddaughter who has learned the magic of horses at the early age of three!

"Mint's Christmas Message" was published in 2003 by Mary Y. Spitz. The book is based on a real pony named Mint who lives on a farm in a small town of Port Washington, New York. The pony was given to a young girl named Rebecca, and her Grandpa Tom does not care for the festivities during the Christmas season. That is, until Mint helps him to understand the real meaning of of the season one Christmas Eve.

The artwork by Joanne Y. Pierce is detailed and beautifully portrays the farm scenes in winter.

This book has the Benjamin Franklin Award seal on the cover. The Benjamin Franklin Awards is an esteemed American book award regarded as the highest national honor in publishing, which includes fifty plus categories judged in excellence in both editorial and design. The award was established by Jan Nathan, founder of IBPA, twenty-one years ago. The first Benjamin Franklin Awards were awarded in 1987 and they are now announced each year at IBPA’s Publishing University, just prior to BookExpo America.
The award is administered by the Independent Book Publishers Association, IBPA, (formerly PMA) with the help of industry professionals coming from the library, bookstore, reviewer, designer, publicity and editorial markets.

Visit the publisher's site to learn more and order:
http://www.mothermoosepress.com/ 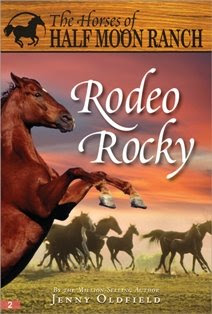 I really enjoyed Kirstie's adventure with this wild horse!

After seeing a gorgeous bay horse encounter frightening situations at a rodeo, Kirstie wants to save it from more of the same. Her understanding mother steps in and offers a huge amount of money to buy the wild stallion so the bay won't have to endure any more rodeo hardships.

The traumatized horse takes awhile to trust the young girl but soon Kirstie is able to slip on a halter and lead him from the small paddock on her farm where he is first kept, to the bigger pasture with other horses. Rocky makes friends with another horse named Lucky who teaches him that all humans are not bad.

Soon, Kirstie is able to ride Rocky and they encounter more difficulties. As usual, Kirstie has one adventure after another but her love for horses keeps her from giving up.

The scenes are vivid and realistic, especially when Lucky is stuck in the muddy bog and Rocky helps to save his friend. The only fault is that a stallion (a wild one at that!) would not be turned out in a pasture with both mares and geldings, nor ridden and trained by a youngster.

But author Jenny Oldfield creates a great story with endearing characters and really makes you feel like you are on a horse ranch out west.
This is one of a new series out for young girls titled, "The Horses of Half Moon Ranch," by Jenny Oldfield. With over a million copies sold in the UK, Jenny Oldfield's loveable and adventurous heroine, Kirstie Scott, will win the hearts of girls and boys everywhere.
Rodeo Rocky can be purchased at: http://www.amazon.com/Rodeo-Rocky-Horses-Half-Ranch/dp/140221328X/ref=sr_1_1?ie=UTF8&s=books&qid=1220541442&sr=1-1
Posted by Sharon Miner at 6:14 PM 3 comments: