Jane Smiley's The Georges and the Jewels 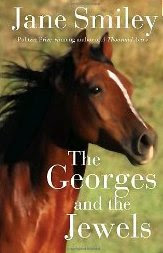 The Georges and the Jewels by Jane Smiley is another of my "Love it!" book for horsey readers of all ages. The title refers to the horses on the Lovitt farm - all the geldings are called George and the mares, Jewel. Abby's father insists this so that they don't become attached since all the horses are for sale.

The 7th grader has her share of problems from difficult horses to ride to social interaction with her peers. She finds solace in the "good" horses, especially a new foal, she names Jack despite her father's rule.

With help from a gentle horse trainer, she learns important life lessons about horses and people alike.

I look forward to reading the sequel about Jack growing up!
Posted by Sharon Miner at 6:54 PM No comments: 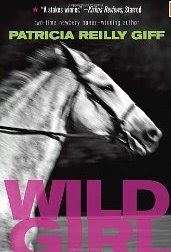 Wild Girl by Patricia Reilly Gif is a young adult novel set in the racing world.

Wow! What a great story! The protagonist, Lidie, is a lovable character and not just because she's horse crazy. The emotional turmoil is heartbreaking at times when she leaves her native Brazil and moves to Queens, NY to be with her father and brother who work at a racing stable. They still think she is a seven-year-old who loves Snow White, while Lidia is 12 and, unknown to her father and brother, rides very well. Being at a new school where no one understands her language, and she knows very little English, Lidia is overwhelmed.

A new horse at the stable named Wild Girl (Lidia's dead mother's nickname for her as well) helps her overcome all the new obstacles and bring the family together.

This is a "must read" for all young readers and horse lovers of all ages.

See more about the author at http://www.randomhouse.com/features/patriciareillygiff/patriciagiff.htm
Posted by Sharon Miner at 7:12 PM No comments: 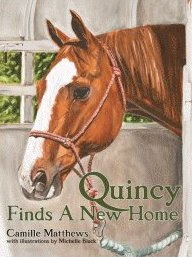 Quincy Finds a New Home by Camille Matthews is an adorable story about a horse who is sold and all the emotions that comes with moving. The artwork by Michelle Black is stunning. The theme of friendship and self-worth ring true for horses and humans alike.

If you need a book for a young horse lover, this is THE ONE! Amazon says it's for readers 4-8 years, but I think any age that has interest in horses.

Quincy has his own website and there's even a page for kids complete with galloping hoofbeats! A new book about Quincy will be released this year. Check out http://www.quincythehorse.com/
Posted by Sharon Miner at 5:37 PM No comments: 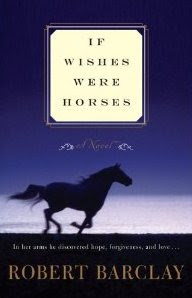 
Posted by Sharon Miner at 6:47 PM No comments: