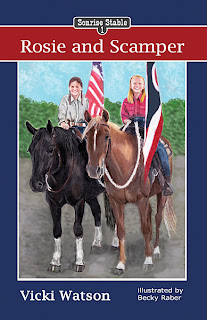 Sonrise Stable - Rosie and Scamper is part of a series by Vicki Watson.

This adorable story is both educational and Christian-based.

Rosie loves to assist her grandmother at the stable. After a beloved mare dies shortly after giving birth, the young girl helps to train the orphan foal. They name him Scamper.

A neighbor takes in a foster girl named Carrie, and soon Rosie has a best friend and a riding pal.

The details of horse care and horsemanship at shows are realistic, as are the situations that the girls find themselves in. And Grandma is always there to teach them about how God is watching over them.

The only jolt was the two year jump forward from Scamper's birth to his mounted training. Maybe it would have been better to start on that first day of riding, with a reflection on how it came to be.

Or break up the book into two. An eight-year-old's emotions and reactions would be so different to a ten-year-old's perspective. I would have liked more about the younger Rosie learning groundwork with Scamper.
Posted by Sharon Miner at 9:31 AM 1 comment:

Blackjack - Dreaming of a Morgan 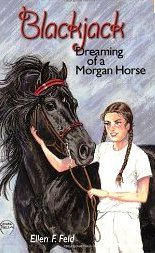 Blackjack - Dreaming of a Morgan by Ellen Feld is a delightful story for young horse lovers. The realistic stable and horse show settings makes it educational as well.

Heather is a teenager who dreams of saving a Morgan named Blackjack from a cruel owner. To her surprise, she meets a horse farm owner who owns a black Morgan stallion. When Heather is offered a job to work there in exchange for riding lessons, she bonds with the stallion named Gallant Image but she gives him the barn name of Blackjack.

As her riding improves, she works on Blackjack who has a problem cantering on the right lead. But their bond of trust overcomes his anxiety and they do well at their first show.

Although the ending was predictable for me, the author creates a tale that is sure to please young horse lovers. My only question is why did Blackjack have to be a stallion? The story would have been just as exciting with him being a gelding, and more suitable for a youth rider.

Learn more about the author at the publisher's site http://www.willowbendpublishing.com/author.htm