The Girl Who Remembered Horses

The Girl Who Remembered Horses by Linda Benson

What a delightful story about the aftermath of Doomsday! I was actually confused at first since I knew nothing about the story prior to reading it. (Love my Kindle!) I thought the setting was cave man days since the people used dogs to pull wagons. Horses were considered wild beasts and if a hunter was good enough, a tasty meal.

This coming of age novel features Sahara (great name!) who has vivid dreams about riding and training horses. She confides only to her grandfather who believes she has inherited a gift - a way with animals. Sahara and her sister along with their grandfather are the last of their family, but travel with a clan of traders. This clan travels the country looking for relics from the old days that they can trade.

During their travels, Sahara sees horses and begs the clan hunters not to kill one that has been shot with an arrow. Later in the story, the teen finds a foal who's mare dies while birthing. Sahara raises the foal on goat's milk and earns the respect of the clan but only after many obstacles.

I was only disappointed in the end - I wanted more! I hope there will be a sequel!

Visit the author's site at http://www.lindabenson.net/ and find her and her novel on Facebook! 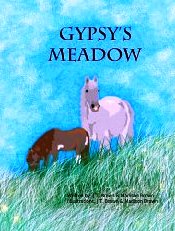 Gypsy's Meadow by JT Brown is an uplifting children's story about a rescued pony and the special relationship with her young girl owner. The girl learns to care for the pony, and they ride the trails and attend horse shows together. When the girl grows up and marries, Gypsy goes to a new home with them. The girl introduces her baby daughter to Gypsy and eventually the horse teaches the youngster, too. When the mare is too old to be ridden, she welcomes new horses to the barn for the mother and daughter to ride. The theme of opening your heart to love is a concept for every reader.

The ending is sad, yet insightful and gives the young reader a positive outlook on death.

Visit the author's blog at http://www.authorjtbrown.blogspot.com/

NOTE FROM THE AUTHOR: “Gypsy’s Meadow” is a touching story which tells a tale of many horses out there that are just plainly looking for a good home.

The purpose and mission of this book, is to raise funds for “First Light Farms Equine Shelter”; so other horses can share their “Remember When” and not “Maybe could be.”

“Every step we take could be another hoof print left in our hearts.”

Posted by Sharon Miner at 4:53 PM No comments: 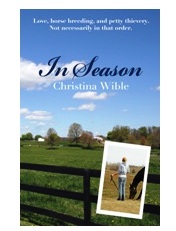 In Season by Christina Wible is set on a breeding farm with the protagonist, FE (Effie) Booker trying to cope with challenging broodmares, tack thieves, a new vet and the new farm owner.

FE is a no-nonsense character who's childhood not only made her build walls around herself emotionally, but also made her a determined business owner of breeding and shipping horses. Her first love, though, is the mares and foals, and she is upset when an owner pulls out his herd.

Although some parts of the ending were predictable, I was pleasantly surprised by the final conclusion.

It is delightful to read such realistic details about the equine breeding industry since I bred Morgan horses for 25 years and spent two years as a manager on a NJ Thoroughbred stud farm.

Learn more about the author and her books at http://christinawible.com/

Posted by Sharon Miner at 10:59 AM No comments: