Communication with All Life 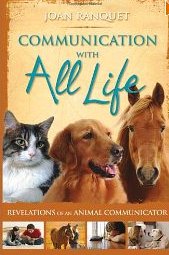 Communication with All Life by Joan Ranquet is an interesting read about the author's "sensing" what pets, horses, etc. need from their human owners or what is causing problems. Some are emotional and some are physical.

Joan explains in her short stories of animals she has helped what she found out from the pet and how she assisted both the animal and owner.

I found some of her "treatments" insightful, others typical if one knows animal instincts. I've been a professional horse trainer for more than 40 years and a pet groomer for five. I agreed with most of her conclusions, as I use body position, hand placement and calming techniques such as humming and singing to encourage an animal to cooperate with me. I don't, however, "talk" to animals or sense a problem by having a phone conversation and looking at the animal's photo.

There was one situation with a horse who had a behavior problem that a smiled when I read it. The treatment of moving the horse to another stable was for the right treatment but for the wrong reason, in my opinion. I've had horses that have acted out at another trainer's barn, and when I took the horse to mine, it was fine. At a new place, the herd instinct causes the horse to be at the bottom of the totem pole again, and he's more open to responding to training. Giving a routine and adding new "jobs" that the horse is capable of handing, will often solve the behavior issue.

If you want to learn helpful insights into animal behavior, this will be an interesting book for you.

Visit the author's site at http://joanranquet.com/ 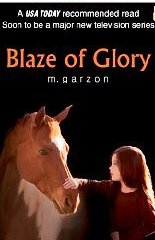 Forbidden Romance would be a better title for this Young Adult novel. Blaze is the name of a horse that the main character, Tea (17 years old), sets her dreams on for the Canadian Hunter/Jumper show scene. When he dies early in the book, her depression sets her in a different direction - a love/lust affair with her first cousin who's in his 20's.

Okay, Jaden is not related by blood since Tea and her twin brother are adopted by her stepfather. They stay with him on the horse farm after their mom dies. She teaches riding and trains/shows hunter/jumpers. Tea also tends to be impulsive and tries to hide her "bad" behavior from her stepdad. He's physically abusive and way over the line, and not one Tea can confide in, especially when she's an emotional wreck after the accident that causes Blaze's death.

But Jaden, the sexy polo playing nephew of her stepdad, is the one that she opens up to, and soon finds herself on an emotional roller coaster. She realizes she shouldn't love him (besides being first cousins legally, she's jail bait) but when she learns he has the same feelings for her, the rest of the book describes their love affair and resolution.

While I liked the horse scenes (not only H/J shows, but also polo) and Tea's way with horses, I did not care for the rest of the drama. I would not want my teenage granddaughter reading about this love affair as if it acceptable. The "happy ending" is that Tea and Jaden announce to the family that they are in love. The first cousin aspect is not as bad as a 17 yr old having sex with a 23 yr old.

I did like the ending when Tea is given a gift - a colt that is Blaze's brother.
Posted by Sharon Miner at 8:44 AM 1 comment: