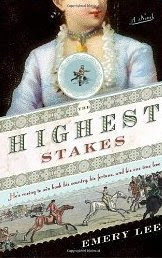 The Highest Stakes by Emery Lee is a historical fiction novel set in the 18th century, mostly in England. The war setting as well as the history of horse racing provide an educational read, while the plot is part love story and part adventure thriller.

The three main characters are fascinating: Charlotte, a spunky orphan, who is determined to achieve her goal of running a stud barn (unheard of in her day!); Robert, a military man who is in love with Charlotte but beneath her in society's eyes; and Philip, a Major and Robert's superior and friend who fights his own demons as well as the enemy soldiers.

But love of women, horses and wealth confuse their relationships, and the obstacles (both self-made and outside issues) create a lively page-turner!

This is a well researched novel though I did have some trouble with the vernacular the author included in the dialog. The horse and racing scenes are described excellently!
Posted by Sharon Miner at 8:04 PM 3 comments: 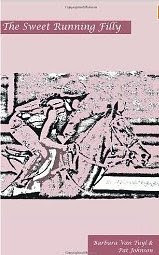 The Sweet Running Filly by Barbara Van Tuyl and Pat Johnson was written for young adult horse lovers, but all ages would enjoy this equine mystery.

Set in the horse racing venue of the Mid-Atlantic states, this exciting novel had me cheering for the protagonist, Julie Jefferson, all the way. Especially when she saves the filly's life - not once, but twice!

Julie, a recent graduate from high school, works for her father in an antique shop but her heart belongs to horses. She and her dad meet an unsavory character who has a filly chained by a river. Mr. Jefferson buys the abused horse for Julie, much to her delight. With her connections at a nearby racing stable, she is able to trade working there for the filly's board and care. She soon learns that the filly she names Bonnie is most likely a valuable racehorse. Someone had exchanged horses, but who and why?

Besides being a fun mystery, I loved the authentic equine and racetrack terminology. The story has likable characters (including the variety of animals) and realistic villains. Although the ending was predictable, it was satisfying.

First published in 1971, the only improvement I could see to engage today's young readers is to include modern technology such as cell phones.

See poppetpress.com to follow Julie and Bonnie in the rest of the series.
Posted by Sharon Miner at 5:54 PM No comments: 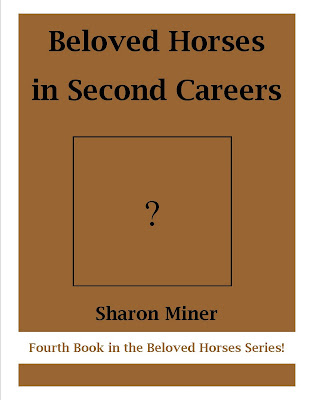 My 4th book in the Beloved Horses series will be released this fall and I need help deciding on the cover - which horse should be featured?

The Beloved Horses series are illustrated collections of true horse stories and the other three books can be viewed at SharonMiner.com or Amazon.com with their Search Inside feature. Horse and animal lovers of all ages enjoy the uplifting, funny and amazing stories about the special bonds between horses and their riders.

I decided to hold a contest where anyone can vote for selected entries. The horse with the most votes will win!

Everyone who has voted will have their name placed in basket, with the name selected during a drawing - the winner will receive a free copy of the book upon its release.

The random drawing will be held during my visit to Gulf Beaches Public Library in Madeira Beach, FL on Tuesday, July 6th. I'll be there to read and entertain the children during the summer program at 2 PM, and at the end I'll have the youngest child pick a name from the basket.

By the middle of June, I will have photos of the featured horses posted on this blog, and voting will be done via the comments with that blog. I'll need a name, user name or some form of identifying the person for each comment. When that name is selected on July 6th, I'll post the name of the winner. That person will need to e-mail me their snail mail address so I can ship the book this fall.

Entries for this contest will also be accepted in person (such as at that July 6th event or any other time I meet people who mention the contest) or via e-mail - sharonminer@yahoo.com.

Click on "Follow this Blog" so you will be notified of updates to this contest!
Posted by Sharon Miner at 7:29 PM 4 comments: 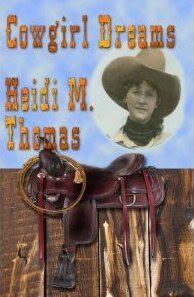 Cowgirl Dreams by Heidi M. Thomas is a keeper!

I loved this book because the voice of the protagonist was so real! Probably because it was based on the author's grandmother, a Montana cowgirl who actually rode steers in rodeos.

This book reminded me of the Little House on the Prairie series. Nettie, like those strong-willed girls who knew what they wanted, went after her dreams with determination and spirit.

Set in the 1920's in Montana, Nettie often rides and enters rodeos behind her parent's backs and against their wishes. Her dream is to be a rodeo star - despite the reputation that she may earn or any of the broken bones she may accumulate. She tries to be a good daughter, especially after a family tragedy, but the rodeo life is only put on the back burning for a little while.

When she meets a handsome cowboy who also loves the rodeos and everything about horses, Nettie learns that her dream doesn't have to be extinguished, just shared.

Visit the author's site at http://www.heidimthomas.com