My Golden Horse by Caroline Akervik 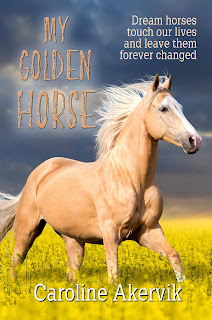 My Golden Horse by Caroline Akervik is a wonderful novel for horse lovers. Most horse people have one horse that is near and dear to their heart. Although this is a fictional story, the horse Tandy was a real horse that the author knew and loved.
Ellen is a teenager with a famous equestrian mother but both are living another life after her mom's tragic accident. Ellen meets Tandy, a beautiful Palomino who has issues after too many horse shows. Ellen feels a connection - that they both need each other. With the help of a friend, the two learn about each other and teach each other along the way.
Posted by Sharon Miner at 4:06 PM

The Brave by Nicholas Evans

The Brave by Nicholas Evans: you may recognize the author's name. He wrote The Horse Whisperer. This novel isn't about horses but rather about a cowboy loving kid.

Tommy loved his sister Diane almost as much as his cowboy TV shows, his escape from his difficult life. When she showed up at his boarding school with her new boyfriend, Flint McCullough, he was amazed. That was his cowboy hero! And when they moved him to California to live with them, he was living his dream.

Until he found out about the family secret.

This is a complex novel with intriguing characters, interesting background and setting, and a deep theme. The viewpoint changes from Tommy as a teen, a younger child and as an adult. So the astounding ending is hinted at but not revealed until the bitter end.

Posted by Sharon Miner at 11:43 AM No comments: 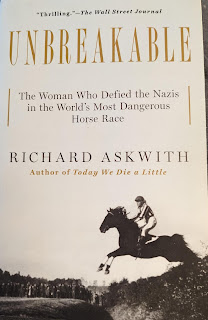 Unbreakable by Richard Askwith is an amazing true story all horse lovers will enjoy. There's excitement, mystery, drama, a lovable main character and details about the races and horses that it seems as if you were there. And the history and culture of Prague and the surrounding area that most people never knew are explained

Lata is courageous and determined in her goal to ride in and win the Grand Pardubice Steeplechase in 1937 when the Nazis have sent elite SS officers to compete. This brutal race was a yearly event that drew immense crowds to watch competitors from all over Europe challenge their horse to unimaginable obstacles.

The photos enrich the story even more!

Posted by Sharon Miner at 5:59 PM No comments: