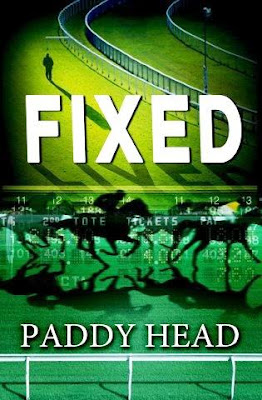 Fixed, by Paddy Head, was an interesting read. Set in 1970's at New England racetracks, the author gives a realistic portrayal of life as an apprentice jockey.

Andrea "Andy" Crowley transfer from Belmont to a track in Boston and learns about New England hospitality - the mob way. She thinks she is just being tested by the regulars, but really she is being watched by some shady characters.

She makes friends with other females in the business, including a jockey named Denise - who was actually a real jockey during that time and later became a friend of mine in Florida before her sudden death to an illness. The book was dedicated in part to her, which was so kind of the author. Denise was one classy lady.

Anyway, between the detailed racing scenes, the backstretch banter and the horses (of course) readers who enjoy horse novels will love this one. Even those who don't know much about racehorses will learn a thing or two about what makes a jockey love what they do!

To learn more about the author and her racing background, see http://www.paddyhead.com/
Posted by Sharon Miner at 7:58 PM

I was hooked on Fixed the moment I started to read it. There I was in the saddle as the gates opened.
Wait a minute that wasn't me.

I loved the book and couldn't put it down. The characters came alive and lived on long after I finished reading the book.

Then later on to my dismay they found Whitey in LA..... the plot thickens!