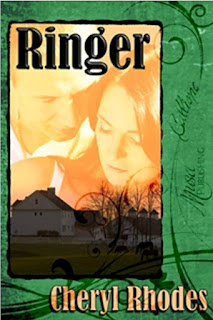 Cheryl Rhodes' romance novel, Ringer, is an exciting read for female horse lovers. It features a brave protagonist named Holly helping a handsome horse trainer named Matt solve the mystery of his missing Standardbred. The settings include racetracks in Canada and California as well as an Oregon horse farm. The backstretch details are vivid and the racing scenes are realistic. And then there's the sexy hot tub scene!

Holly, with her horse in her trailer, is on her way to a new job on a drill team when she rescues Matt from drowning in a track fountain after he was beat up. He persuades her to take him and his mare across the Canadian border to his Oregon farm. But that's just the beginning of their adventure together as they try to figure out the who and why of the horse theft. Along the way, they fall in love despite Holly's misgivings of loving a track man who most likely will break her heart.

Loved the realistic horse scenes, the suspense and the conflicts, but I felt the romantic ending was a little unbelievable.

Find her e-book on Amazon etc and visit http://cherylrhodes.blogspot.com/

Sharon, thank you so much for taking the time to review Ringer!