The Troubles by C. J. Hambley 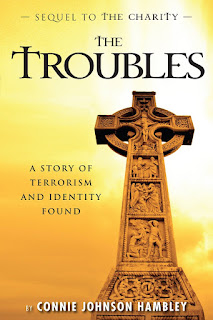 In The Troubles by Connie Johnson Hambley, Jessica Wyeth arrives in Ireland to hide out and discover more about her mother, Bridget, who she knew to be her aunt but who raised her after her parent's death. She trains horses to prepare them for competition, but is practically a captive by a housekeeper named Nan, per the orders of her boyfriend, Michael. He has ties to the IRA and finds he must decide between his allegiance to his heritage or his American girlfriend.

This suspense novel has interesting horse scenes and unusual characters. It is well written although it was sometimes hard to follow because of flashback scenes.