Paisley the Pony by Cindy Freland 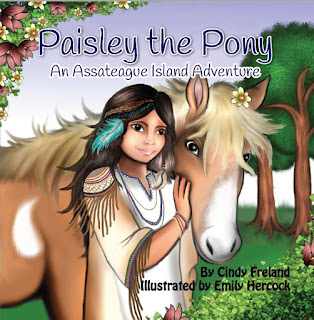 Paisley the Pony by Cindy Freland is about a special pony on Assateague Island off Maryland's Atlantic shore and an Indian girl named Kanti. When a Spanish ship crashes there in 1750, the Indians help the crew and horses survive. Kanti received Paisley as a gift for her 8th birthday. The story describes the work the Indians did as well as the games such as horse racing.


The story is somewhat confusing at times, especially in the beginning. It starts in first person with Alyssa (a grandmother telling the story to her granddaughter), then switches to third person. And the horses have dialog with each other as well as the humans. The transitions could be smoother.